Arrival of this new limited edition hardback book is imminent, with dispatch starting by the end of this week! Order now for your copy.

News of the new book was announced via eurodragster.com on April 28

This new book will be a fine companion work for the Mister Six book, at 208 pages, in hardback. Over 90000 words tell the story of motorcycle drag racing and sprinting in the era that John Hobbs became its leading participant.
There are more than 360 photographs to accompany the story, which also covers John’s return to classic sprinting - and the rise of Dragstalgia.

Planned for publication during the winter of 2021-2 will be the new book I am busy working on:
John Hobbs and the Age of the Twins
The book will look at the period when John was racing, when twin cylinders, and twin engines were so prolific in drag bike racing. We take a look at the riders involved in a golden age for the sport.
Then comes the rebirth of John’s riding days as the nostalgia racing scene evolved.

The drag racing community will pay tribute to Dennis Priddle at the Santa Pod Dragstalgia event on Saturday 10 July, when a one minute silence, followed by a burnout by Paul Harris in the Monza funny car, will provide a fitting send off to this legendary figure, who sadly passed on April 27 .

Please note that the Mister Six book is now sold out.
My thanks to everybody who has purchased a copy

A big thank you to all of those who have contacted me to say how much they are enjoying reading the Mister Six book, as for many it has brought back great memories of watching Dennis in action.

Over at Eurodragster.com which is the premier site for drag racing news in europe, news editor Tog  posted his review of the book on November 27. If you want to see how he rated the experience, then please follow the link to:  eurodragster.com/news/news.asp?Story=november27#november27

FOLLOWING THE SUCCESSFUL BOOK LAUNCH AT THE BRITISH DRAG RACING HALL OF FAME EVENT, THIS MAJOR NEW WORK ON LEADING EUROPEAN DRAG RACING ICON DENNIS PRIDDLE IS NOW SHIPPING. IT IS ONLY AVAILABLE TO ORDER FROM THIS WEB SITE.

GREAT NEWS - THE FINISHED BOOKS HAVE BEEN RECEIVED, READY FOR THE OFFICIAL LAUNCH DATE OF NOVEMBER 17. ORDER YOUR COPY, ONLY AVAILABLE FROM THIS WEB SITE. 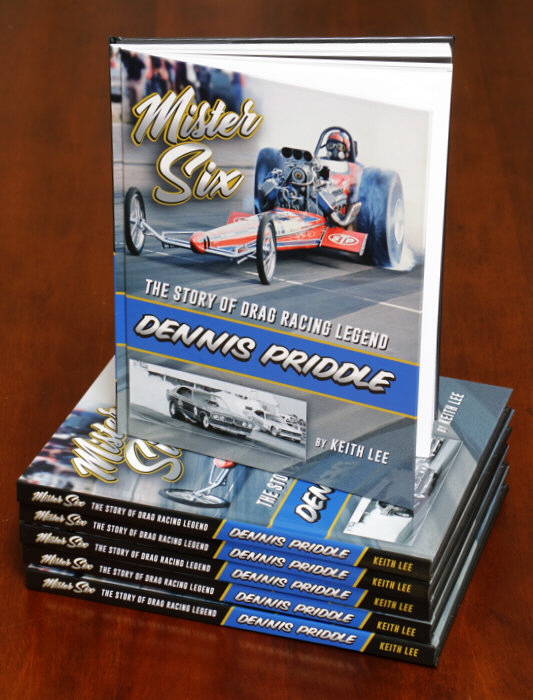 PRE-ORDERING NOW AVAILABLE
The book ordering system is now ready to order copies of the Mister Six book via secure PayPal link. Please note that the book is only available for delivery to registered UK addresses via the Book Orders page. For other requirements, please email the author  through the contact page

BOOK LAUNCH NOVEMBER 17, 2018
The much awaited book on Dennis Priddle will be launched on the day of the British Drag Racing Hall of Fame gala, at the Oatlands Park Hotel, Weybridge. Copies of the book will be available during the Bench Racing session and signing session, starting at 12 noon.

DUE FOR PUBLICATION IN NOVEMBER 2018
MISTER SIX: the story of drag racing legend Dennis Priddle
For two decades, Dennis Priddle competed in that most explosive of motor sports, drag racing. He was a major force in Europe, where he enjoyed great success at the very top level. He also built some of the outstanding cars of the period, as the sport underwent a massive rise in popularity. A highly respected engineer, whose attention to detail is legendary, Dennis was much feared on the track for his determination and lightning starts, driving supercharged, nitro-burning dragsters and funny cars. He was the first competitor outside of North America to run under seven seconds for the standing-start quarter mile, which earned him the nickname Mister Six. Dennis also ran the world’s quickest time for a front-engined dragster, when he clocked 6.04s in the beautiful Mr. Revell slingshot.

Dennis Priddle did much to popularise the sport across Europe, with countless appearances at shows and demonstrations throughout his time behind the wheel of those record-breaking cars, from the mid-sixties through to the mid-eighties, when he retired. He was there at the very start of drag racing in Sweden, which was a country he always enjoyed visiting, and which has developed a strong racing culture.

Normally a very private person, this book, written by his friend and respected drag racing photojournalist, Keith Lee, will open up a unique view of the life and times of this proud native of Somerset, both on and off track. Heavily illustrated, this detailed hardback book contains a superb selection of photographs, many previously unpublished, Keith’s fascinating detailed account unwraps the life story of this formidable character, who is best known to his many drag racing fans as Mister Six.